Whether in a single service or in a microservice, the API interface provided by the developer for the front end has an upper limit of access. When the frequency of access or the amount of concurrency exceeds its tolerance, we must consider current limit to ensure the interface. Availability or degraded availability. That is, the interface also needs to be installed with a fuse to prevent the system from being paralyzed due to excessive pressure on the system by unexpected requests.

This article will introduce periodlimit.

go-zero adopts a sliding window counting method to calculate the number of accesses to the same resource within a period of time. If it exceeds the specified limit, access is denied. Of course, if you are accessing different resources within a period of time, the amount of access to each resource does not exceed the limit. In this case, a large number of requests are allowed to come in.

As for the above return code, return it to the caller. The caller decides to request subsequent operations:

The following picture describes the process of request entry and the subsequent situation when the request triggers limit: 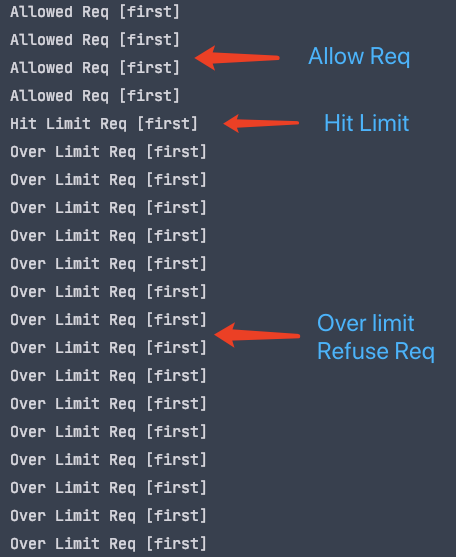 If a large batch of requests comes in at a certain point in the service, the periodlimit reaches the limit threshold in a short period of time, and the set time range is far from reaching. The processing of subsequent requests becomes a problem.

It is not processed in periodlimit, but code is returned. The processing of subsequent requests is left to the developer.

So in the next article, we will talk about tokenlimit

The periodlimit current limiting scheme in go-zero is based on redis counters. By calling redis lua script, it guarantees the atomicity of the counting process and guarantees that the counting is normal under distributed conditions. However, this scheme has disadvantages because it needs to record all behavior records within the time window. If this amount is particularly large, memory consumption will become very serious.